You’ve seen some cats, a bearded dragon, and now, let’s bring a dog into the picture. Get ready to meet Ori, owned by Teri Dederer. Teri is Ori’s faithful and devoted human slave, dedicated to carrying out his extensive feeding and exercise regime. She and Ori have been together for seven wonderful years, beginning in Pittsburgh, Pennsylvania and ending up here in Bowling Green, Ohio where Teri is a second-year graduate student pursuing her M.F.A. in fiction. She is the Fiction Editor at the Mid-American Review.

Title: Head of the Committee for the Veracity of Animal Characterization (CVAC) 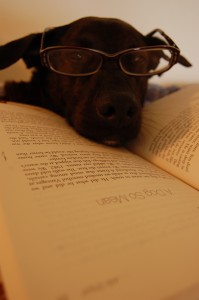 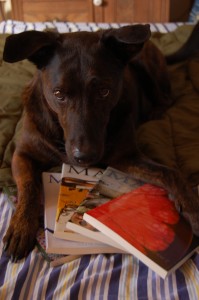 Meet the amazing, the wonderful, the one and only, Ori! Entering into his middle-age, Ori would ideally like to eat and nap his way through each day. His laid-back personality stems from his island roots, given that he was rescued from St. Maarten. In dog terms, Ori is a Coconut Retriever, which is simply an island mutt of unknown origin. Rescued when he was still fairly young, Ori had had his fair share of health concerns, having to undergo treatment for Lyme disease, heartworms, canine ehrlichiosis, worms (eww!)…but now he faces the threat of the developed world—obesity. Ori is happy to report that having undertaken a rigorous running program, his figure is now trim and slim once again.

Always a bit shy and timid, Ori would prefer that all people let him do the “covert sniff” upon first meeting, whereupon you ignore him, and he MIGHT decide to give you a sniff when your back is turned. Despite his social anxiety, his affection can be bought with high-quality dog-bones. 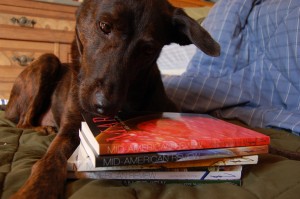 One place that Ori always feels secure is at the MAR classroom! Ori is a frequent contributor toward discussions, and as Head of the Committee for the Veracity of Animal Characterization (CVAC), he is a valuable consultant for our team. 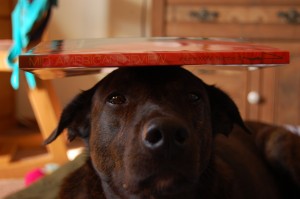 *Please note: no animals were harmed in the making of this ridiculously cute blog post.