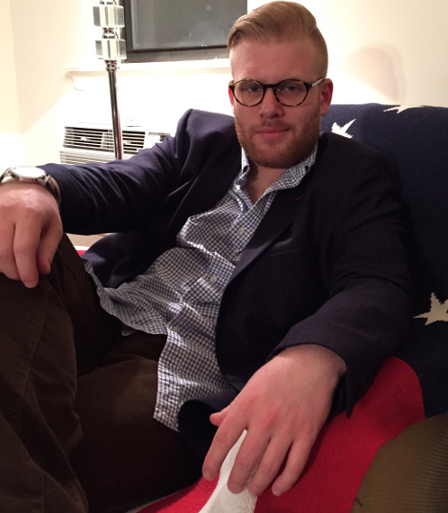 Sean Hammer was born in 1988 in Washington, DC and raised in nearby Silver Spring, Maryland. He holds degrees from Boston University and Johns Hopkins, and is beginning his MFA in Fiction at Hunter College in September 2015. His work has been featured in various journals, and his monthly column can be found online at The Prague Revue. He lives in New York City and kneels at the holy altar of validation, so if you like his work, follow him on Twitter and boost his ego.

Quick! Summarize your story/poem/essay in 10 words or fewer. Extra points if your answer rhymes.

After meeting Rasputin (maybe), a lawyer obsesses over charitable giving.

What can you share about this story prior to its MAR publication?

I’d planned on “The Charity Diet” being a much longer story. In the original draft, I’d made it to the scene in Central Park (top of page two in the final, published version) at page 10. At the time, I worked for the public transportation system in New York City. To distract myself from the soul-depleting bureaucracy, I wrote stories while I was supposed to be writing construction proposals. (You didn’t hear that from me.) Realizing the story I was working on didn’t merit the bloated length it was leaning toward, I decided to spend the afternoon writing quick paragraphs plot point by plot point from my original, longer outline. The promise I held myself to was that I would “get something done” in every single paragraph, and in that way would move the story along as quickly as possible. I wrote the draft in an afternoon, revised it a number of times, and here we are.

Pumped. Really, really pumped. I’ve had a number pieces published online, some of which have sold/been read in far greater numbers than I’d ever expected, but this is my first story in print. To have that milestone come in such a long-standing, respected journal is special. Then when I went through MAR’s author index and saw names like Aimee Bender and David Foster Wallace I vacillated from feelings of inadequacy to outright ecstasy. I think that’s about as good as it gets for a writer. Side note: the afternoon I received the MAR acceptance, I’d been at The Whitney Museum on Manhattan’s Upper East Side. I’ve only been to the museum twice, and each time I came home to an e-mail telling me I was having a story published. (The other was in The Prague Revue, where I now write a monthly non-fiction column.) Needless to say, I’ll be returning to the Whitney next time my desperation reaches critical mass.

My good friend John Miller told me to take out some of the specificity I’d included. Normally I hate this note (I don’t believe in the “overly specific references date a work” school of thought) but in this particular piece, he was right. I’m glad I listened.

Most of the time people ask, “what kind of stuff do you write?” I start broad, answering simply, “fiction.” This answer is almost never sufficient, despite my prayers. If pressed, I’ll upgrade my response to, “I always have a number of things going at once, usually a few stories and I’m working on some ‘longer’ projects, too” – sometimes people just nod here, and I’m off the hook. If they call my bluff and ask what the mysterious “longer projects” are about, I’m forced to admit it’s nearly impossible to talk about a work-in-progress without hyperventilating. I’m not sure why that is – maybe because it feels like cheating somehow, as though announcing the existence of a draft is promising a finished, published project. Unsolicited advice for everyone: never, ever tell your grandmother you’re writing a novel.

Don’t get me wrong: I love my family and I love talking about writing with them. It’s just difficult to discuss your own projects a) before they’re finished and b) without sounding self-congratulatory. Pretty much the only person I can do that with is my dad (he gets me about as much as anyone is going to, I think) and even then, it’s rare.

My first published short story, “Cornbread.” It was pulled from the slush pile by the intern readers at Kindle Singles and then championed by the editor-in-chief, Dave Blum. I was young for something like that (24), it sold well over 10,000 copies, and was named one of the “Top Ten Kindle Singles of 2012” by Amazon.com against some incredibly stiff competition from Big Name Writers. It still sells a few copies every day, a fact I’m certain of because I remain vain enough to return to the website regularly.

Any wasted time. Something I love about writing is that it turns the all-time greatest leisure activity – reading! – into homework/research, but something I hate about writing is that it makes me feel guilty for pretty much any downtime unless I’ve already written a significant amount that day. It can be hard to enjoy things when there’s a voice in my ear telling me I’ll never get where I want to be if I keep wasting time. You can’t write twenty-four hours a day, but you can certainly obsess over it every waking moment.

Not picking up my phone the time Bode Miller called me. It’s a long story.

Bode Miller called me, once.

I’d have to go with “The Girl Who Not Once Cried Wolf” by George Choundas. One of those stories I read with my jaw on the floor. I don’t want to spoil much for anyone who hasn’t read it, but I will say that it’s a nearly impossible task to take a story everyone already knows and not only make it your own, but make it riveting and shocking. That’s what Choundas has done here. My eyes raced my heart to the ending. 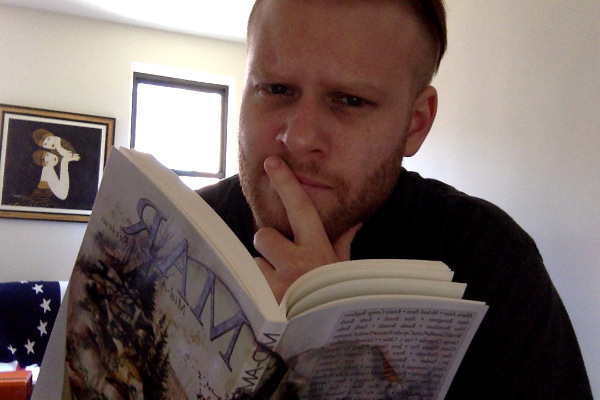 Thanks for the interview, Sean!
Laura Maylene Walter, Fiction Editor