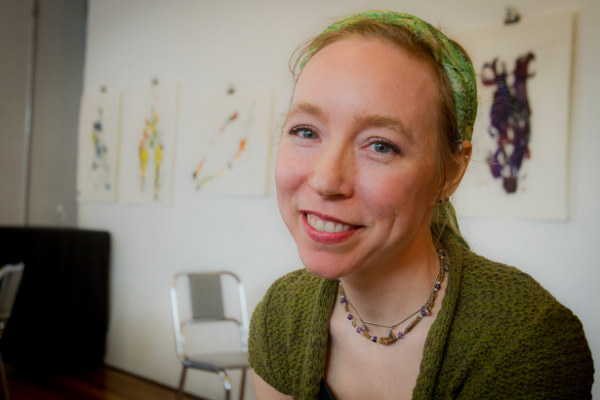 “Do you want to touch my monkey? Do you like his yellow shirt? What about his teeny pair of jeans? How about a picture with my monkey? He will climb up on your shoulder or sit on your hip, his little hand will clutch the silver heart of your necklace. Would you rather hold this red parrot? Listen, he says hello in Russian. He says goodbye, da-svi-da-nya.”

1. Quick! Summarize your story/poem/essay in 10 words or fewer.

An essay on traveling to Russia for with love.

2. What can you share about this piece prior to its MAR publication?

I started drafting “From Russia with Love Melancholia” while I was traveling in Moscow and Sochi in 2011. At the beginning of the trip, I was often jetlagged and/or culture shocked. Taking just a few moments to record my impressions allowed me to think through the cultural differences and reflect on my experiences while I was there. When I returned home to the United States, I continued writing bits and pieces of the essay, focusing on the parts of my travels that lingered, or that I found myself returning to without conscious effort. Russia didn’t just go away after I returned to my normal Nebraska summer of gardening, bicycling, and working. Rather, like learning a new word, Russia seemed to filter into my everyday life. I found myself seeking out more of Russia in the form of renting movies like the 1963 James Bond film From Russia with Love, reading books like Elliot Holt’s You Are One of Them, and attending cultural events like The Russian National Ballet Theatre’s production of Sleeping Beauty. Even recently, I enjoyed the audiobook version of Donna Tartt’s The Goldfinch for the literary quality and the story, of course, but also for the reader’s performance of Theo’s Russian-born friend Boris.

3. You’re at a family reunion and some long-lost relative asks about your writing. What do you say?

Actually, something like this recently happened. I was giving a reading in Omaha at a local art gallery this spring and a woman approached me before the event to ask if we were related, given that we had the same last name. She said, “I came to this reading because of your last name.” She asked specifically if I was a descendant of a Charles “Chick” Wiseman. I was. He was my great-grandfather. She was a descendant of his elder brother. We talked a little about that connection and then I explained that I’d recently written a book about our mutual ancestor, Matilda Fletcher Wiseman, who was a nineteenth century lecturer, suffragist, and poet. Matilda was my great-great-great-grandmother and Chick’s great-grandmother. My book Queen of the Platform follows Matilda’s career by exploring the connection to the men in her life: her brother, a civil war solider, her first husband, a school teacher and a lawyer, and her second husband, a minister who became her agent. Matilda spoke to support herself and her family. On the stage she spoke among other lecturers of her time, such as Susan B. Anthony and Elizabeth Cady Stanton. I didn’t have extra copies of Queen of the Platform with me at the reading, but I did have a copy of my chapbook Men and Their Whims, a series that focuses specifically on the bond between Matilda and her younger brother, Geo, who was charged with murder. Handing over a copy of the chapbook for free to my recently discovered Wiseman cousin, I said, “Here,” adding, “Thank you for coming to my reading.” I also told her how she could find Matilda’s book about the murder case.

4. What do you consider your biggest writing-related success?

I always feel like my latest released book or chapbook is my biggest success. Thus, I’m delighted to have my newest book of poetry, American Galactic, in the world. Opening with an epigraph from Charles Simic, “Lots of people around here have been taken for rides in UFOs,” American Galactic, explores Martians, crop circles, abductions, and how humans face an extraterrestrial invasion via sci-fi poetry.

5. Tell us one strange thing about yourself that does not involve writing.

I successfully biked every mile of RAGBRAI this summer, biking 446 miles across the state of Iowa in seven days. My team’s mascot was a Martian.

6. Tell us one strange thing about yourself that does involve writing.

I write every day.

7. Do you have another favorite piece of writing in this issue of MAR? If so, name it and tell us why.

I adore Jeannine Hall Gailey’s poem “Every Human is a Black Box.” I’ve been a fan of Gailey’s work ever since I read her fabulous Becoming the Villainess. In the MAR poem, I love how she explores and charts the ways each of our bodies are marked by a world that none of us can fully read.

Great responses. Now, if we could only have a shot of you with your MAR issue…. 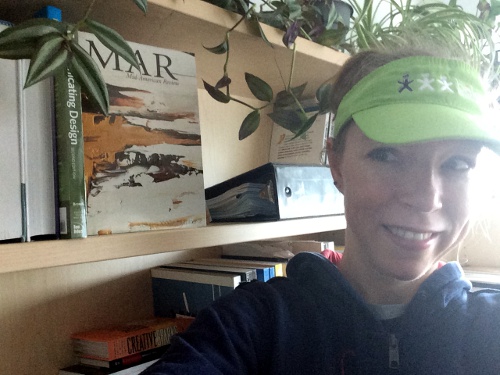 MAR is a gal’s best friend.

Perfect. Thanks for your time!