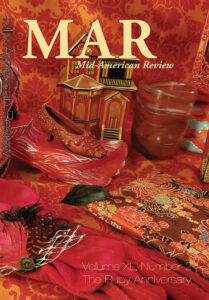 Joseph Levens, “Clarification”
Shane Page, “One Guy Says to the Other”
Saul Alpert-Abrams, “Special Treatment”
Sam Asher, “Where I’m From”
Amanda Funk-Hilton, “Anne Practicing in a Mirror When She Was Young”

Translation Chapbooks
Felipe Moncada Mijic, “In the Region of the Inexpressible”
Translated from the Spanish and Introduced by Robert A. Keiser

Fabio Pusterla, “Starved for Everything”
Translated from the Italian and Introduced by Will Schutt

One thought on “Latest Issues”

All funds directly assist Mid-American Review in putting new literature in the hands of readers.

Check out our fall writing festival!