Accepted: “Inaccurate (self)Portraits of Water by the Artist Victor Vaughn” by Travis Vick 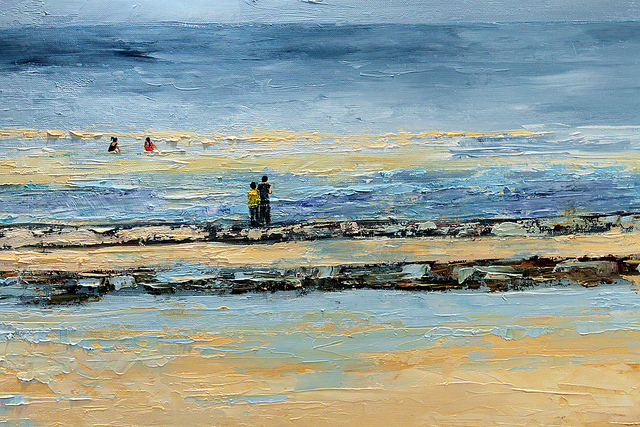 In our “Accepted” column, Mid-American Review editors discuss why they selected stories, poems, or essays for publication. In this post, Assistant Fiction Editor Lydia Munnell discusses a story that appears in our Fall 2014 issue. (Above image: Ollbac)

From its first page, “Inaccurate (self)Portraits of Water by the Artist Victor Vaughn,” introduces four different voices: the third person narrator, the voice of an art critic, the curatorial description of a painting, and the voice of the artist—Victor himself. The rules are clear and the principal figure is revealed. Victor Vaughn is a product of fragments; it’s the structure that’s always central.

And as the story progresses, Victor’s life and history are relayed in his paintings, in the musings of his critics, in his own words offered by way of interviews. In that way, the act of reading “Inaccurate (self)Portraits …” mimics what it means to understand a life—that people are remembered through fragments and episodes. And while author Travis Vick’s structure is remarkable here, it functions as well as it does because it contains the traditional stuff of great stories too: compelling characters with complicated histories, desires, ghosts.

The specters, here, are Victor’s parents. His art and life are haunted by his mother, drowned in a nearby lake; his father, hung in the barn after the death of his wife; and Mr. Powell the neighbor whose house burned and who is linked to a single fond memory of Victor’s father. And Victor maintains his own shadow over the story. In death he is remembered by his critics, his work, his widow.

These fragments are balanced skillfully. Vick maintains distinctive voices for each piece of the narrative, and the look of the thing—its format on the page—signals changes in speaker, commands a different kind of reading. Beyond the formatting and the voices, though, the fragments work because of deftly woven images. Victor is a painter, and “Inaccurate (self)Portraits…” is visually alive. Upon the death of Victor’s father, the farm animals he forgot to shut in are left, “cantering augustly” across neighbors’ lawns. And the water death of Victor’s mother determines much of the story’s imagery. “And, when out in public,” says one of Victor’s critics, “doesn’t he always seem to be moving about a room more by the aid of his hands than of his feet, as if lost, as if swimming through dark water?’”

In the end, to read “Inaccurate (self)Portraits of Water by the Artist Victor Vaughn” is to wade. The structure commands that readers adjust their pacing, that they move through it in slowly, steadily. But carefully curated images cement the fragments together. Here are water and fire: the elements, the stuff of great paintings.

What MAR editors said about “Inaccurate (self)Portraits of Water by the Artist Victor Vaughn”:

“I like the repetition and the sense of cataloging his life, and I think the author uses effective snippets/portraits/scenes to show who Vaughn was.”

“The many voices all felt clear and distinct, and the episodes were well chosen. They illuminated Vaughn as well as the particular world of the story.”

“The repetition worked well, and the multi-genre feel was very intriguing. … The writing was strong and inventive.”

Lydia Munnell is pursuing her MFA at Bowling Green State University, where she serves
as assistant fiction editor of Mid-American Review. She comes to BGSU by way of
Cleveland, where she hosted a weekly folk radio show called Revival and wrote for
Cleveland Scene magazine.