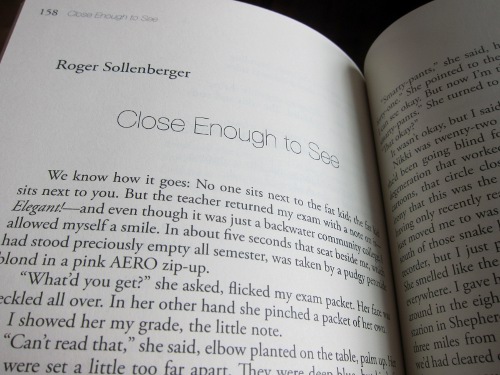 In our “Accepted” column, Mid-American Review editors discuss why they selected stories, poems, or essays for publication. In this post, past Fiction Editor Jason Marc Harris discusses a short story that appears in our Spring 2014 issue.

Genre: Short fiction
Title: “Close Enough to See”
Author: Roger Sollenberger
MAR issue: Vol. XXXIV, Number 2 (Spring 2014)
First line: “We know how it goes: no one sits next to the fat kid; the fat kid sits next to you.”

From the first line of Roger Sollenberger’s “Close Enough to See,” the narrator, Sol, manifests a continuum of interesting qualities: intelligent, self-deprecating, sarcastic, comedic, defensive, honest, even-tempered, and needy. Sol is thoroughly ambivalent about himself and the people around him. These characteristics are developed further when Sol encounters Nikki, who gravitates towards him because of his academic prowess in their community college statistics class. She wants to cheat off him, and he’s a virgin who has never had a girlfriend, but their rapport crosses into many dimensions beyond mutual opportunism. The progress of their relationship explores ethnic identity, sexuality, and class tensions. Besides Nikki, the story offers a range of other characters, such as Sol’s father, a retired geologist obsessed with catching a bear in their backyard. The light ironic tone of the narrative often belies the profundity of the topics the story delves into.

Many of our editors remarked on the use of the setting in this story. In particular, we see the Blue Ridge Mountains of West Virginia, which delineate the physical space these characters inhabit, but also imply how the lives of Nikki and Sol are bounded and dwarfed by rhythms and measures of the natural world that are nearly infinite. Sol and Nikki are part of a larger landscape and trajectory of change: “Nikki said her house smelled like a hell of a lot of cigarettes. She sat me instead on the couch on the porch, which sagged, then ran a hand under my chin and went inside for beers. I drummed my heels on the wood, looked out across the yard, settling into the light evening chill. Above the trees on the other side of the road I could make out the blue Appalachian mountains, half a billion years old and once higher than the Himalayas today, now worn down to these hills, these arcs, featureless and smooth and perfect.”

The sense of that sublime attrition over the immense scale of geologic time extends into the narrowness of Nikki’s house, and those looming ridges help define the interior worlds of Nikki and Sol as well: “The Appalachians rose way off to my right, which was west, land so dark it seemed part of the night itself, and it would have been impossible to tell where the mountains ended and the night began if it weren’t for the radio towers on the ridge, a line of red lights that marked the limit of the land, and I shivered once and lowered myself to my knees.” In this scene, Sol has accepted Nikki’s dare to attempt to meet the Devil at the crossroads. The revelation he experiences is not supernatural but deeply personal, and he learns more about himself and Nikki, a private world within the unknown darkness of the collective human psyche that their relationship explores.

Highlighted by the title, the story is also about blindness, physical and spiritual. Nikki, we learn, has trouble with her eyes, and both she and Sol have much to learn about each other and themselves. “Close Enough to See” is a deeply humane story, always engaging with its substantial characters and entertaining because of the comedic and insightful narrative voice.

What MAR editors said about “Close Enough to See”:

“The characters are interesting and well-drawn. Setting is beautifully rendered.”
“Story really drew me in.”
“Gritty.”
“There is a pathos here that I liked.”