Mid-American Review welcomes our new Fiction Editor, Teri Dederer, to the staff! Teri grew up in the foothills of the Appalachian Mountains north of Pittsburgh, Pennsylvania and attended the University of Pittsburgh. She is currently a second-year graduate student pursuing an M.F.A. in fiction from Bowling Green State University, where she takes long walks alongside corn fields with her beloved dog, Ori. 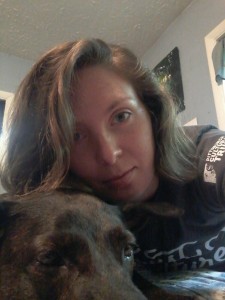 Q: What drew you to the writing world?

T: A love of reading! My parents are big readers, so our house had hundreds of books, and when you live in the middle of the woods (literally), summer breaks were usually spent reading on a couch. I started writing after a sixth grade teacher gave my class a creative writing exercise. I wrote a story about how Edgar Allen Poe might have died from rabies after an unfortunate encounter with a black cat.

Q: How has your time in the MFA been?

T: Being around my cohort and the graduate faculty here at Bowling Green has been expansive. I’ve encountered new authors, new styles of writing, and I think it has pushed my own writing to be more daring. I’ve also made some lifelong writing buddies who have introduced me to the pleasures of wine tastings. Still debating which was the more important discovery.

Q: What makes you want to accept a submission?

T: Tough question—I tend to like a variety of things and styles. But if I’m going to take something, it needs to be great on every single page. I like pieces that pack an emotional punch, and quirky and unusual stories tend to draw me in. It needs to feel fresh and new and shiny!

T: Maybe it’s my favorite story because it’s the first one I accepted since taking over as Fiction Editor, but “Goon” by Micah Cratty, which will be featured in the next issue. The voice is comically tragic, and so well-crafted that I wanted it immediately, and I still can’t stop thinking about the image of a ditch with cows looking on.

Q: What’s the best advice a writer has given you?

T: Probably just to keep writing—something that several writers/mentors have told me. It’s easy to say, ‘I’ll write tomorrow’ when you’re feeling stuck or blocked, but sometimes the reason you don’t want to write a scene is because you’re scared to write it. And those are usually the most important ones. I’d rather write it and revise it than sit there feeling guilty about not writing.

T: Seeing my dog try to hide in the neighbor’s cornfields. He thinks he’s so clever.