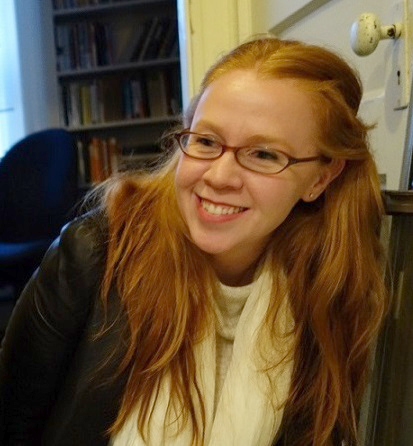 Allison Adair’s poems have appeared or are forthcoming in The Missouri Review (“Poem of the Week”), Boston Review, The Journal of Compressed Creative Arts, Tahoma Literary Review, the Boston Globe, and the anthology Hacks; and her interactive digital projects have appeared recently at The Rumpus and Electric Literature. She teaches at Boston College and Grub Street and holds an MFA from the Iowa Writers’ Workshop. Adair’s prose poem, “Letter to My Niece, in Silverton, Colorado,” appears in MAR 35.1 as the winner of the 2014 Fineline Competition.

This piece came about fairly quickly, in one sitting. But that’s somewhat deceptive, as I’d been working for several months on a poem with the same idea – a dedication to my niece, about a younger version of her mother, a version she will never know. The poem wasn’t coming together as I’d hoped, so I first decided to borrow a brilliant technique from a friend, poet Eduardo C. Corral, who experiments with different forms not just during the writing process, but also once the poem is (seemingly) finished. He calls it “putting the poem into different containers.” In my case, though, line breaks themselves felt too self-conscious, too poeticized, so shifting from couplets to quatrains, etc., didn’t seem to solve the problem. In a moment of exhaustion, I stopped arm-wrestling the poem and just reconnected to the original impulse of letter-writing. I wrote the whole thing fresh – blank page. Not a single line from the original poem appears in the published version – not a single image, in fact – but they surely informed it.

What was your reaction upon learning you won the Fineline Competition?

I was overjoyed, and humbled. Also grateful. The piece is a strange poetry-prose hybrid – not really a story, but not a poem, either – and I really appreciate that the Fineline Competition has created a space for my and other writers’ “between” work.

There are two, and they might be related. The first is figuring out how to create consistent writing time despite the obligations (and delights) of working-motherhood. Making writing a priority often translates to a lack of sleep – but it has also led to almost forty new poems in a year. The other success, as I would define it, is not allowing ambition to become an excuse. For years, I refused to send work out at all, because I knew everything could be tighter, fresher, better. And maybe it could have, and maybe it still can. But now I work and rework, rework some more, then seek out feedback, revise, and send things off. If I still want to continue revising at that point, I do, but the piece is already in circulation, and I’m on to the next poem. It’s partly motherhood that has taught me to how to move on, how to participate without waiting for perfection.

I was a competitive ballroom dancer in college. Specialty: international rumba.

It’s nearly impossible for me to write poetry, and more so to read it, while listening to music – even instrumental music, and even if the volume is low, buried deep in the background. It feels like a shouting match to me – my brain doesn’t seem to know how to sort the layers of sound.

I’ve come back again and again to Matt Sumpter’s “Dead Zoo.” The tension between the various roles of the speaker – participant, observer, observed – seems smart to me, but fresh. It’s a poem with a concept that doesn’t feel overly conceptual, partly due to its highly animated images: “They’re born again / in glass: a doe tacking hard // forever, leaping a painted creek, / the cougar caught with a pheasant // it can’t spit.” I love how Sumpter gives us motion frozen in time. Poetry is a lot like taxidermy, isn’t it?

Here’s where we usually ask contributors to share a photo of themselves holding a contributor copy of MAR. But here, we’ll do one better — this photo shows Allison reading her Fineline-winning poem at the Mid-American Review 35th anniversary party at AWP 2015 in Minneapolis: 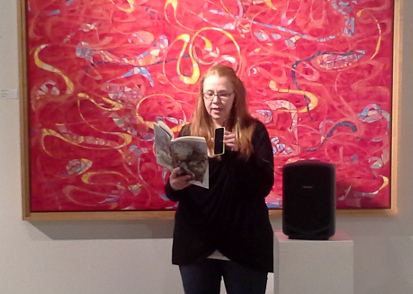 Thanks for the interview, Allison!
Laura Maylene Walter, Fiction Editor